Get a quote
Radon Shop
No products in the cart.
£0.00 Cart

A sump system lowers the pressure under a property, to reduce radon levels, and is the most effective radon system for solid floors. To achieve a low pressure in the sump, fans are fitted to extract air from the sump, making them an active system. Active sump systems can provide a solution for all levels of radon, even above 1000 Bqm-3. Sump systems comprise a sump, sump pipe, fan, and accessories. The main variations on the ‘sump system’ are whether they are constructed using a ‘mini-sump’ or ‘traditional’ sump, or use a ‘low’ or ‘high’ level outlet, (these are explained in more detail below). 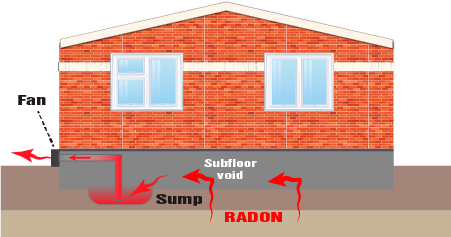 By lowering the pressure under a property you can divert radon away from the occupied space, and sump systems are by far the best method of achieving a radon reduction in a property with solid floors, as they work outside of the lived-in space of the property i.e. under the floor, in the ground/hard-core. However, be careful when trying to lower the pressure in occupied rooms, using other methods such as extractor fans, or chimneys (associated with open fires, or solid fuel stoves), as these can lower the pressure in the property, and possibly increase Radon sumps

Sumps were traditionally constructed using bricks and a slab, and were fitted near the centre of a property. However, ‘mini-sumps’ became more popular when it was realised that they work just as well as traditional sumps in retro-fit situations, cost less to construct, and caused far less disruption to the properties occupants. For these reasons UK Radon Ltd now fit almost all mini-sump systems, unless directed by specific limitations to their use.

A sump can work easily up to 15 metres in any direction (down into the ground being the most important), or an area of 250 metres square. This normally can deal with most domestic households for example. Traditionally high level outlets were fitted to sump systems, with fans bolted to a wall. Low level outlet systems have become far more popular in recent years because they work as well as traditional systems, are generally quieter (baffles can be fitted), and are far less obtrusive aesthetically. UK Radon Ltd now always fit low-level outlet systems unless specific conditions dictate fitment of a high level outlet system, such as extraction from a small courtyard.

See also BRE quick guides 4,5, and 6 for more information on the Publications page.

Low level outlet sump systems can be fitted in association with all solid floor properties. They are the cheapest active sump system that can be fitted. UK Radon Ltd fits low level outlet sump systems complete as a boxed unit. This is done to reduce fan noise, make the system less obtrusive, and provide the fan with greater protection from the environment. The main limitation to low level outlet systems is that they can be noisier in small courtyards, because their outlet is at low level, so there can be some resonance between walls. However, baffles usually minimise this issue. There is also potential in very confined spaces that radon could enter a permanently open window close to a fan (e.g. within 1m of the fan outlet). In these cases an outlet pipe can be added to change the system to a high level outlet radon sump system.

A quick guide to radon remediation