Natural ventilation to remove radon is the use of natural air movements to reduce radon, and can be very cheap method to fit. This method focuses on fitting air bricks, core vents, permanent trickle vents, or re-opening existing vents or chimneys to get more fresh air into a room, or increase air movement in a room to reduce radon levels. However it can be the source of cold drafts if not fitted in appropriate locations. 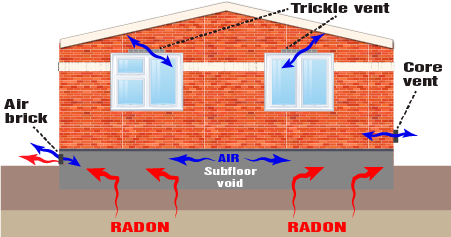 On under-floor applications, traditional clay air bricks have a very small airspace between grilles. By fitting high performance air bricks air flow can be increased significantly under suspended floors – the change producing by as much as four times the airflow between an old clay air brick and a new high performance plastic air brick. Air brick replacement is most successful at low radon levels up to 300bq, but will have some impact on even high levels of radon.

Core vents and trickle vents can significantly increase natural air movements above the ground floor, within rooms. Core vents are fitted in a wall to increase the flow of air from outside the property, to a fireplace. This stops the fire reducing the pressure in a room that is starved of oxygen, and as a consequence draw radon into the room. As an aside, core vents must be fitted by law with appliances using combustion for heating, if they are above 5kW power, to stop potential fatalities from carbon monoxide poisoning.

A quick guide to radon remediation